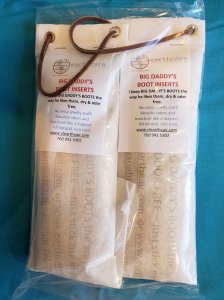 Big Daddy's Inserts keeps Big Daddy's boots and gloves the way he likes them, dry and odor free.  Little Mama loves them too!

Simply place inserts in boots, gloves, or shoes and like a magnet moisture and stinks are absorbed.  Leave inserts in overnight or longer.

View All Testimonials
Add A Testimonial
Copyright © 2021 Clear the Air