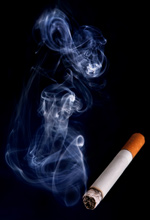 Remove Cigarette, Cigar and other Smoke Odors with out Fragrances or Chemicals

The truth is that cigarette smoke permeates into our furniture, carpets, walls, windows, and just about every other nook and cranny in our homes, making it particularly difficult to eliminate smoke odors. Earth Care's Clear The Air Odor Eliminators will pull the smoke odors out of carpets, drapes, furniture, clothing, and bedding without coming into contact them. It works well to remove cigarette smoke odor in cars, pulling the odors from the carpet and upholstery.

Simple to use and inexpensive Earth Care is the answer to remove smoke odors. This unique form of Earth Care Products Mineral does not have to come into contact with the odor producer; it will pull the odors from the entire area. Clear The Air draws in odors like a powerful magnet. The odors are absorbed, and neutralized without any fragrances.

Clear The Air does not cover up odors; it literally "clears the air" leaving the air fresh and clean.

How to Eliminate Smoke Odors

How to Eliminate Cigarette Smoke Odor in Car

I got the cat and dog urine feces odor remover as a gift to try from my sister and I'm absolutely sold on it! We have both a cat and a dog who have...
Read More ->

View All Testimonials
Add A Testimonial
Copyright © 2023 Clear the Air